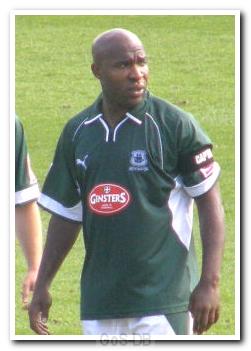 Born in Lambeth, Hayles began his football with Willesden Hawkeye and then Stevenage Borough, where he made his mark in their 1996 FA Cup run. Spotted by Ian Holloway, he signed for Bristol Rovers the following year. After scoring 38 goals in 81 games for the Pirates he moved to Fulham for a reported £2 million fee and helped the club gain promotion from Division Two to the Premiership.

After six seasons, 214 games and 57 goals for Fulham he was released on a free transfer and moved to Sheffield United in the summer of 2004, but failed to settle and after just a month of the new season, moved back to his native London to sign for Millwall. A serious knee injury kept him on the sidelines for four months in his second season at the New Den but he still amassed 60 appearances (17 goals) in his two years at Millwall before joining Holloway at Argyle in the summer of 2006.

Hayles, capped ten times by Jamaica, finished his first season at Home Park as the club's leading goalscorer, but he left at the end of 2007 to join Holloway for a third time after the manager's shock move to Leicester City. Hayles only scored twice in 30 games over a season and a half with the Foxes, which included two loan spells with Cheltenham Town before joining the Gloucestershire club full-time in July 2009.

His career in the senior game ended a year later, dropping into non-league football with Truro City, where he spent two successful seasons and helped the club win promotion to the Conference South (tier 6). He had two further spells with Truro, interspersed with a half-season at St Albans City and a season with Arlesey Town.

In June 2015 Hayles joined Chesham United as a player/coach, where the barnstorming striker was still going strong at the ripe old age of 44. After two seasons with Chesham, including an emotional return and substitute appearance in an FA Cup victory at Bristol Rovers in November 2015, Hayles signed for Hellenic League side Windsor as a player-coach in July 2017.

Greens on Screen is run as a service to fellow supporters, in all good faith, without commercial or private gain.  I have no wish to abuse copyright regulations and apologise unreservedly if this occurs. If you own any of the material used on this site, and object to its inclusion, please get in touch using the 'Contact Us' button at the top of each page. Search facility powered by JRank Search Engine.Milonic UK time at page load: 21 January 2021, 08:09.