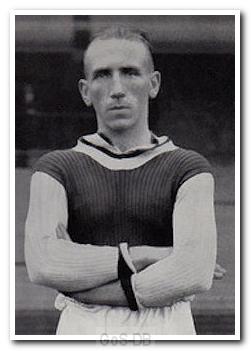 Haycock was one of 27 in the guest category. Born in Bootle, the winger started his career with Bootle schoolboys, Liverpool & District Schools and Waterford Town in Ireland before a brief spell with Blackburn Rovers, although no senior appearances are recorded, and then back locally with Prescot Cables FC. He signed for Aston Villa in 1936 and across the next three years made 100 appearances and scored 28 goals before the war interrupted his career, so was an experienced top-flight player when he guested for Argyle in December 1945, along with club-mate Albert Kerr. Nicknamed 'Schneider' at Villa Park for reasons which aren't apparent, he also guested for ICI Kynochs, Kidderminster Harriers, Leicester City, Liverpool, Nottingham Forest, Northampton, Notts County, Walsall and Wolverhampton Wanderers during the war. Villa kept his registration until the war was over but he made no further appearances for them; instead he moved closer to home to join Wrexham in 1946, and then into non-league football with Hednesford Town and finally Stourbridge.

At IMI (the Imperial Metals Industry at Witton in Birmingham), an external transport system existed to ferry workers at unsociable hours. Fred was one of the drivers, a physically tough nuggety man. He lived down the road from us in Turnberry Road. Always cheerful and modest, he would pick me up at ungodly hours of a Sunday morning (1972). Not sure what he thought of a somewhat disheveled youth, given his background! Never said much about football - he would be in his early sixties then. I recall he told me that one of his sons joined the priesthood. Lovely chap.