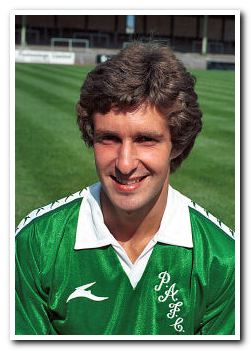 Harrison was one of a rare breed: an Argyle apprentice who progressed through the ranks to become a first team regular for eight seasions. An unassuming character, he was not a player of great flamboyance or outstanding skill, nor was he a big physical defender. He made his way in football through anticipation, good ball control and an innate ability to read the game. He was deployed as either a right-back or centre-back in his 11 years at Home Park, and played under seven different managers. Harrison left Argyle for Swansea City in 1985 and went on to play for Saltash United.

Greens on Screen is run as a service to fellow supporters, in all good faith, without commercial or private gain.  I have no wish to abuse copyright regulations and apologise unreservedly if this occurs. If you own any of the material used on this site, and object to its inclusion, please get in touch using the 'Contact Us' button at the top of each page. Search facility powered by JRank Search Engine. Hover facility courtesy of Milonic. UK time at page load: 23 April 2021, 03:49.