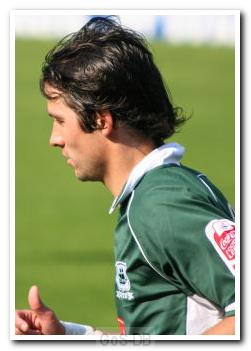 Halmosi initially joined Argyle on loan from Debrecen in 2007, a move that was made permanent for a then club-record fee of £400,000 after several very impressive performances. The left-sided midfielder and Hungarian international (35 caps) started his career with hometown side Haladas Szombathely and also had a spell in Austria with Grazer AK. He returned to Hungary to join Debrecen before moving to Home Park. His form for Argyle led to interest from several clubs and was eventually lured away by Hull City for £2 million after his second full season at the club.

Halmosi rarely hit the heights at Hull and made only 18 appearances as the move disappointingly fizzled out. On the final day of the January transfer window Halmosi returned to Haladas Szombathely on loan until the end of the 200910 season. In January 2011, Halmosi left Hull City by mutual consent and, once again, hooked up with Haladas in Hungary on a three and a half year contract.

Blimey - WHAT a player. Part of the trio of Magical Magyars, with Akos Buzsaky and Krisztian Timar. He arrived initially on loan and quickly accumulated 'sign him on, sign him on, sign him on' chants from Argyle fans everywhere. Tremendously skillful - his two performances in successive season-straddling away wins at the KC Stadium vs Hull City (last game of 2006/07 and first of 2007/8) are surely what persuaded The Tigers to part with £2 million when they made the 'Promised Land' - he bossed both games. He also ran England defender Glenn Johnson ragged in a narrow 2-1 defeat to Portsmouth in the FA Cup 4th Round (Argyle were the only team to score against that season's cup winners).

As a man who picked up the odd red card in his parks football 'career', I quite liked the rarity value of the fact that he was once sent-off on a stretcher after injuring himself with a high, late and clumsy tackle at home to Watford in March 2008. I remember the ignominy of the ref tapping his chest as he had just been lifted up on the stretcher and Halmosi looking up to see the red card flourished as he departed horizontally to the minority cheer of the away fans in the Barn Park End!