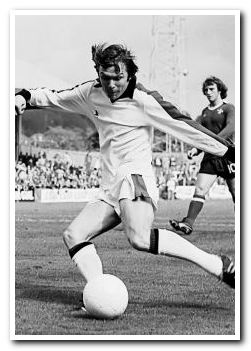 Came from: Liverpool   Went to: Burnley

Hall was part of the hugely successful Liverpool side of the 1970s, having signed professional terms in 1969 when he graduated from Liverpool University. In total the Glaswegian midfielder and mathematician went on to make 224 appearances in all competitions for the Anfield club, scoring 21 goals and winning medals for the First Division (tier 1) championship and UEFA Cup in 1972/73, the FA Cup in 1973/74, the Charity Shield in 1974 and then another First Division championship and UEFA Cup double in 1975/76. He also picked up runners-up medals in the 1970/71 FA Cup and the 1971 Charity Shield. However, with the emergence of a young Jimmy Case and the signing of Ray Kennedy from Arsenal, his chances diminished and he left the club to move to Home Park.

Hall's capture in July 1976 was a huge coup for Tony Waiters, with the diminutive midfielder declaring his ambition to take Argyle to the top. At the end of his first season, Argyle were relegated to the Third Division and Tony Waiters had gone. In the following November, Hall left Home Park for Burnley, where he played 43 times in three years before moving into non-league football with Northwich Victoria. Hanging up his boots in 1980, he maintained links with Liverpool and returned in 1991 to head the club's PR department.

Hall is still remembered fondly as a player on Merseyside through his non-stop displays, which earned him a voted place at No.75 in an official club website poll of '100 Players Who Shook The Kop'.

The '(H)all for Argyle' campaign was a memorable feature of the long hot summer of 1976. Tony Waiters ran at least one marathon as part of an epic campaign to raise the £50,000 needed to sign Hall. I remember how exciting it all seemed at the time. And though we had lost Rafferty, we had Mariner and Hall and Doug Collins had just joined from Burnley. We started the league campaign in fine form, a 2-2 draw away at Oldham and then we thumped Blackburn 4-0 at home on a balmy Tuesday evening. Collins, Hall, Mariner all scored. Hall was a classy player no doubt. He scored a cracking goal against Chelsea in an early match at home (which I used to be able to find on YouTube but can't now).

Then, it all went so wrong that season; Mariner left, replaced by a crocked John Peddelty and Terry Austin, and we just lost our way. I've always wanted to know exactly what happened that season, why everything went so spectacularly wrong, but while he was here Brian Hall lent a touch of class to the team.