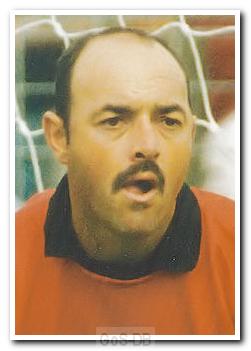 Bruce Grobbelaar was in the twilight of his illustrious career when he arrived at Home Park in 1996. The Zimbabwe international made his name as part of the great Liverpool team of the 1980s after playing for Highlanders in his native Zimbabwe, Durban City in South Africa, Vancouver Whitecaps in Canada (briefly under the guidance of Tony Waiters) and during a loan spell with Crewe Alexandra. In a 13-year career at Anfield, Grobbelaar won countless major honours including the 1984 European Cup after performing his famous wobbly legs routine in the penalty shoot-out.

After a loan spell with Stoke City, he left Anfield in 1994 to join Southampton but his reputation was heavily tarnished by match-fixing allegations. Grobbelaar still retained his agility and the confidence of a top class goalkeeper despite being 39 when he played for Argyle. After one season at Home Park he went on to play for Oxford United, Sheffield Wednesday, Oldham Athletic, Chesham United, Bury, Lincoln City, Northwich Victoria and Glasshoughton Welfare. He also won 32 caps for Zimbabwe.

Greens on Screen is run as a service to fellow supporters, in all good faith, without commercial or private gain.  I have no wish to abuse copyright regulations and apologise unreservedly if this occurs. If you own any of the material used on this site, and object to its inclusion, please get in touch using the 'Contact Us' button at the top of each page. Search facility powered by JRank Search Engine.Milonic UK time at page load: 21 January 2021, 08:49.