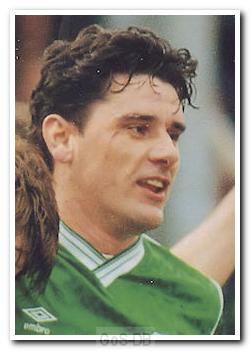 Gregory, a former England midfielder, was unique in that he joined Plymouth Argyle as caretaker manager and then, once the managerial vacancy had been filled, made his first team debut as a player.

Gregory was born in Scunthorpe in 1954 and turned professional with Fourth Division Northampton Town in May 1972. After 187 appearances, he signed for Aston Villa in June 1977. After 2 years and 65 matches for the First Division side, he joined newly promoted Brighton and Hove Albion for £250,000 in 1979, playing 72 times and helping them stay in the top flight. In June 1981, he signed for Queens Park Rangers and entered the most successful period of his playing career, playing in the 1982 FA Cup final (in which QPR were beaten by Tottenham) and winning a Second Division championship medal in 1983. This promotion also brought him six England caps. After 161 appearances and 36 goals for QPR, Gregory left Loftus Road in November 1985 to join Derby County, where he played another 103 games, scoring 22 goals, and winning another Second Division championship medal in 1987. He was appointed player-manager at Portsmouth in July 1989 but things did not go well and he was dismissed at the end of that year.

Finding himself unemployed, Gregory accepted Argyle's offer of a temporary job as team manager, with the promise of a permanent job if results merited it, in February 1990. He took charge for 2 matches, both away defeats, and, although the team's performance improved under him, the board of directors decided not to keep him, appointing David Kemp as manager. Gregory did not depart Home Park, however; instead, at the beginning of March 1990, he made his first League appearance in nearly two years, a 3-0 home win against Sunderland. He played twice more under Kemp, losing away to Brighton and at home to Swindon before leaving.

A further brief, non-contract spell with Bolton Wanderers followed towards the end of the 1989-1990 season, and he then joined the coaching staff at Leicester City. In 1994, he took a similar job at Aston Villa, leaving to become manager of Wycombe Wanderers in October 1996. Having guided Wycombe to Second Division safety, he was appointed manager of Aston Villa in 1998 and of Derby County in 2002. Dismissed by Derby County in 2003, he worked as a football pundit for Sky until, in September 2006, he was appointed manager of his old club QPR until his dismissal in October 2007.

Since leaving the Hoops in 2007 he had a peripatetic managerial career. After a couple of years out of the game he was appointed manager at Israeli side Maccabi Ahi Nazareth in 2009 but left after they were relegated, before then being offered a three-year deal at fellow Israeli side FC Ashdod in 2010. However, with Ashdod on the verge of relegation he left in 2011 and took over at Almaty-based Kazakhstan side FC Kairat in June 2011, but left by the December.

In December 2013, following another couple of years out of the game, he returned to English football as manager of Crawley Town. Ten months later it was announced that he required open heart surgery, and although the operation to replace a valve in January 2015 was successful, he left the club at the end of the season.