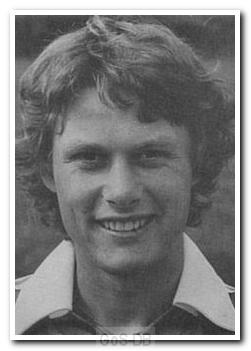 Came from: Apprentice   Went to: Wealdstone

Mark Graves was an Isleworth-born forward who served his apprenticeship at Home Park, making his debut in December 1977 at just 16 years old. He had to wait another 18 months for his first of three goals for the club, and in a total of 42 appearances for Argyle, he never scored at Home Park. He moved into non-League football with the then ambitious Wealdstone in the Alliance Premier League (now the Conference), winning the Jock Law Supporters' Player of the Year award in the 1982-83 season, and netted 30 goals in the following campaign.

I went to school with Mark. A couple of years older than me but even at school he was class. He moved with his mum and brother Dean to Cornworthy, a village 6 odd miles outside Totnes. His mum worked in the village pub. They later moved to Harbertonford. Mark attended King Edward VI Comprehensive School. I remember him playing at 'Sid James Park'. I never saw a lot of him as I was in the Navy by then. He was always a nice guy at school. His brother Dean went on to play for Argyle Youth with another Totnes lad, Nigel Jarvis.