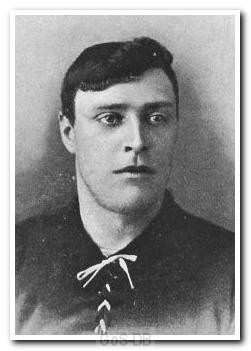 Came from: Stoke   Went to: Reading

Born in Stockton, County Durham in 1879, Godley started his career with South Bank, a Northern League side from Middlesbrough. He was a prolific goal-scorer at that level and this led to a move to Second Division Middlesbrough in 1901. After two seasons, and just two appearances for The Boro, he moved on to Stoke, where he also played just twice in his only season with the club.

In 1905 Godley moved to Home Park and much was expected of a player who could play at inside or outside-left, or centre forward. The 1905-06 Argyle handbook described him as "fast, knows the game and shoots well. Should be up in the scoring department at the end of the season". However, he could not make a big impact on the Argyle first team and moved on at the end of the campaign, joining Reading. He went on to play for New Brompton before returning to the North East to finish his career with Darlington.