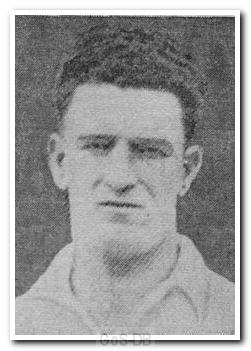 Glover was one of six Pilgrims who made their Argyle debut in one of the three games of the abandoned 1939-40 season. Born in Swansea, the forward started his career as a youth playing football for The Forward Movement, a church group set up to assist the poor and working classes, known today as the The Presbyterian Church of Wales. In 1928 he signed for Swansea Town as an 18-year-old, but failed to make a League appearance for his hometown team. It was a move to Grimsby Town in 1929 that turned his career  in a ten-year spell he played 227 games and scored a remarkable 180 goals. Whilst with The Mariners he won seven full Wales caps, scoring seven goals, and remains Grimsby's most capped player as well as a club legend.

Arriving at Home Park with Grimsby teammate Cyril Lewis, Glover continued to play in the South West Regional League in the months following the declaration of war, and then joined the Police War Reserve. He also added a further war-time cap to his previous seven for Wales, scoring in a 1-1 draw against England at Ninian Park, Cardiff on 11th November 1939.

By 1945 Glover was a publican in Tamerton Foliot, where he remained resident until passing away on 9th September 1971, his birthday.

Greens on Screen is run as a service to fellow supporters, in all good faith, without commercial or private gain.  I have no wish to abuse copyright regulations and apologise unreservedly if this occurs. If you own any of the material used on this site, and object to its inclusion, please get in touch using the 'Contact Us' button at the top of each page. Search facility powered by JRank Search Engine. Hover facility courtesy of Milonic. UK time at page load: 22 April 2021, 21:48.