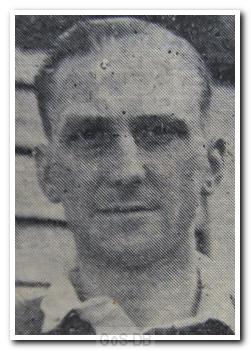 Born in Tideswell in Derbyshire, the centre-half arrived from Manchester United in January 1946, having played a single wartime game for The Red Devils in the 1943-44 season. He was nevertheless described in the Western Evening Herald as a "an experienced player" and after his debut against Wolves, the Western Independent said "Gibson came here on approval. In other words, Manchester United are prepared to transfer him if Argyle like him. At the moment he is on demobilisation leave from the Forces." Commenting on his debut performance, which coincided with Argyle's first win of the season after 27 attempts, the Independent said: "He gave solidarity to the defence, and always used the ball with discretion. Not for him the hefty kick up the middle of the field on the 'Anything, anywhere' principle. Time after time, after breaking up a Wolves movement, he came away with the ball at his toes and distributed it in such a way as to start an Argyle attacking move. All of us who saw him yesterday will hope that Argyle will be able to come to terms for him."

Indeed they did, and he went on to play regularly for the rest of the 1946-46 Football League South campaign. Gibson made his full Football League debut the following September, playing six times at that level before transferring to Exeter City for the 1947-48 season, where he went on to make 38 league appearances before retiring at the end of the season.