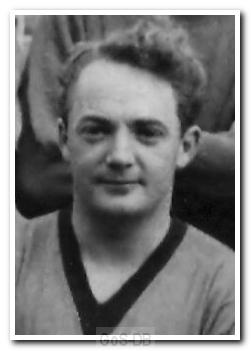 Born in Aberdeen, Gauld started out at Pittodrie. With pace a vital part of his game (he was also a top class sprinter), he moved into the Highland League, first with Huntly and then Elgin City, where he was spotted by League of Ireland's Waterford. He was outstanding in Ireland, scoring 30 goals in his first full season to finish the league's leading scorer, and he also won representative honours, playing twice for a League of Ireland XI. In May 1955 he was snapped up by top-flight Charlton Athletic, where he scored 21 in 47 appearances. The following year he moved on to Everton, scoring 7 in 23 games before arriving in Plymouth in October 1957.

At inside-forward, Gauld was one of the stars of the 1958-59 promotion side, scoring 21 league goals that season and attracting great praise for his scintillating performances. His tremendous bursts of speed and mazy dribbling made him a great favourite amongst supporters, who were outraged when he was sold to Swindon at the start of the 1959-60 campaign. He lasted just a season there before being moved on to St Johnstone, and there were whispers that he had persuaded team mates at Swindon to throw a match. Within months he moved again, this time to Mansfield Town, but four games into his time at Field Mill he suffered a badly broken leg, which ended his career.

In 1964 a shock expose by the People newspaper named Gauld as the ringleader in a bribes scandal that shook football to the core. It showed that he was at the heart of a crooked scam which had fixed up to three matches per week. After pleading guilty he served four years in jail and his illegal activities also saw nine other players imprisoned, including current England internationals Peter Swan and Tony Kay.

Greens on Screen is run as a service to fellow supporters, in all good faith, without commercial or private gain.  I have no wish to abuse copyright regulations and apologise unreservedly if this occurs. If you own any of the material used on this site, and object to its inclusion, please get in touch using the 'Contact Us' button at the top of each page. Search facility powered by JRank Search Engine. Hover facility courtesy of Milonic. UK time at page load: 23 April 2021, 03:39.