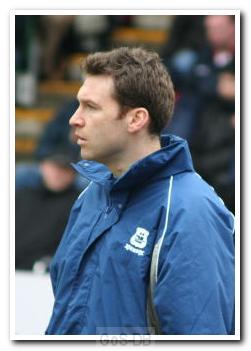 Gallen started his career with Queens Park Rangers and set numerous youth team scoring records, also representing England at under-21 level. He formed a lethal partnership with Les Ferdinand after breaking into the first team but Ferdinands departure meant QPR eventually slumped to relegation in 1996. A serious knee injury began to hamper his first team prospects at the Hoops, and he again found himself out of the side after a succession of injuries in 1998-99. In 2000 he joined Huddersfield Town but could not win a regular place and was released after a single season.

Gallen then signed for Barnsley, but returned to QPR just months later. His second-coming at Loftus Road was a revelation and he is roundly considered a club legend at QPR. He scored over 50 goals in the next five seasons, before a loan move to Argyle to link up again with former QPR manager Ian Holloway. Despite scoring only twice in four months at Home Park, Argyle offered Gallen a contract when he was released by QPR, but he turned it down in favour of a move to MK Dons. A year later he moved on to Luton Town where he was part of the side that slipped into the Conference in 2009. He spent three months on loan at Barnet before having his Hatters contract terminated in January 2011.

Gallen saw out his career in non-league football and had spells Braintree Town, Leverstock Green and Aylesbury United, before returning to QPR as a youth team coach.

In June 2015 he became a first team coach and then left the Loftus Road coaching system in January 2016 with the arrival of new manager, Jimmy Floyd Hasselbaink, who brought in his own staff. Gallen then became involved in two football-related business ventures and began a football column for the Brent & Kilburn Times.