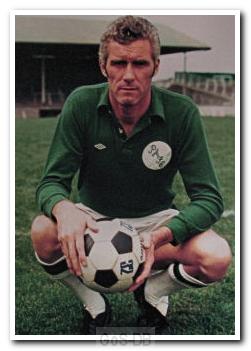 Furnell's career began at Burnley, but he only made two appearances before Bill Shankly surprisingly signed him for Liverpool. He helped the club regain a place in the top-flight before moving to Arsenal where he made 167 appearances and played in the 1968 League Cup Final. Rotherham was his next stop, and then he arrived at Home Park as cover for Pat Dunne in 1970.

At nearly 33 years old, Furnell was now a veteran goalkeeper and many regarded him to be just a stop-gap for the Pilgrims, but he had other plans and won the Player of the Year award after his first full season at Home Park. Playing some of the best football of his career, he helped Argyle reach the League Cup semi-final in 1974 and gain promotion to Division Two the following year.

He had a number of superstitious rituals that were adhered to before every game, including a hot bath, putting on his right boot first and being the first player kitted up. Furnell remained an agile goalkeeper in his late thirties and his handling was impeccable. After hanging up his gloves he worked as a coach at Home Park and later with Blackburn Rovers.

I was 11 years old and already knew that I loved Argyle, but I didn't get really emotional about it at all until the end of this game. We were deservedly leading 2-1 with goals coming from Mike Green and Billy Rafferty, my childhood hero. Time was ticking away and we had one foot in the third round. Then the unthinkable happened - Palace got a penalty in the last minute. Up stepped Terry Venables and he slid the ball to the bottom left of the goal. Jim Furnell anticipated the direction of the kick and saved it - and I burst into tears of joy! Jim booted the ball out towards the Mayflower and the referee called time on the game.

There have been many emotional times, happy and sad, since that day but Jim Furnell will always be the first Argyle player to make me cry. What a 'keeper!

Greens on Screen is run as a service to fellow supporters, in all good faith, without commercial or private gain.  I have no wish to abuse copyright regulations and apologise unreservedly if this occurs. If you own any of the material used on this site, and object to its inclusion, please get in touch using the 'Contact Us' button at the top of each page. Search facility powered by JRank Search Engine. Hover facility courtesy of Milonic. UK time at page load: 23 April 2021, 02:22.