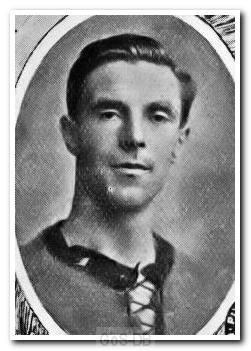 Born in Leith, now a district of Edinburgh, Forbes could play at inside or outside-right or through the middle as a centre-forward. He started his career with Leith Athletic and also played for Heart of Midlothian before moving south in 1922 for 14 games in two years with Everton. With Goodison Park teammate Jack Cock, he then made the long move to Home Park, spending five seasons in green and clocking up 166 games and 54 goals. In 1929 he moved to Bristol Rovers where he made over 60 appearances in a year long stay, and then returned north of the border with Leith. However, a second spell in England ensued when he joined Northampton Town in 1932 to make another 35 Football League appearances before returning to finish his career with Airdrieonians.

Greens on Screen is run as a service to fellow supporters, in all good faith, without commercial or private gain.  I have no wish to abuse copyright regulations and apologise unreservedly if this occurs. If you own any of the material used on this site, and object to its inclusion, please get in touch using the 'Contact Us' button at the top of each page. Search facility powered by JRank Search Engine.Milonic UK time at page load: 22 January 2021, 19:45.