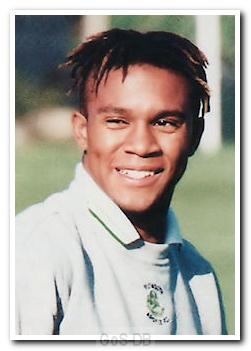 Came from: Watford   Went to: Retired

A headline writer's dream, Flash joined Argyle from Watford in the summer of 1998. A youth-team player at both Aston Villa and Manchester United (where he roomed with David Beckham), Flash was highly regarded as a youngster but was unfortunate to come through a year after the likes of Beckham, Paul Scholes and Nicky Butt. His path to the first team blocked at Old Trafford, the attacking midfielder signed for Wolves and later Watford - for whom he made just one League appearance after being plagued by injury. Unfortunately for Flash, his career continued in a similar theme at Home Park. He started the 1998/99 season as a first team regular, but was struck by the injury jinx once more and he was eventually forced to retire at the age of just 23.

Greens on Screen is run as a service to fellow supporters, in all good faith, without commercial or private gain.  I have no wish to abuse copyright regulations and apologise unreservedly if this occurs. If you own any of the material used on this site, and object to its inclusion, please get in touch using the 'Contact Us' button at the top of each page. Search facility powered by JRank Search Engine. UK time at page load: 10 April 2021, 12:01.