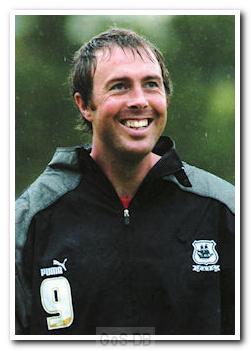 1. Came from: Trainee   Went to: Southampton

When a player is as well-known by a nickname as he is by his actual name, he's probably either a legend or a cult hero among his club's fans. Mickey 'Trigger' Evans is both. A product of the club's youth setup and bona fide Janner, Evans made his first team debut for the club as a 17-year-old substitute in a 5-1 thrashing at Port Vale in December 1990. The travelling Green Army could not possibly have known then that the youngster's final appearance in a green shirt would come almost 16 years later.

Evans scored his first goal against Millwall in the Zenith Data Systems Cup in October 1991, but had to wait until March 1993 for his first League goal  that coming against Preston at Home Park. It wasn't until the playoff season of 93-94 that he really came to prominence, scoring seven goals in nine games as the Pilgrims surged to the top of the table. Two sublime goals at Rotherham underlined the strength, awareness and finishing ability that would eventually lead to a big-money move away from Home Park.

Relegation to the fourth tier of English football for the first time ever saw Evans take his place as Argyle's No.1 striker, and he struck 13 goals as The Pilgrims bounced back at the first attempt via a playoff final at Wembley. The following season was a tough one for Argyle at a higher level, but Evans had bagged 12 goals by February and was on course to set a personal best before he was whisked off to the Premier League in a record-breaking deal for his club. Southampton were clinging onto their top-flight status for dear life, and manager Graeme Souness parted with £650,000 to take Evans to The Dell. The Plymouth boy had a dream start to his Saints career, scoring four goals in six games to be awarded the Premier League Player of the Month award. But Souness resigned despite saving Southampton from the drop, and Evans wasn't fancied by new boss Dave Jones. After making a handful of appearances in the early months of the 1997-98 season, he was allowed to join West Brom for £750,000. His days at The Hawthorns, however, were blighted by injury and he made just 63 appearances in three years, scoring only six goals. He joined Bristol Rovers in 2000 as his journey back down the divisions continued, but was labelled an expensive flop after just three goals in 19 games and his career was left stagnant after such promising beginnings. With the 28-year-old floundering in Rovers' reserves, Argyle boss Paul Sturrock paid a nominal fee to take him back to where it all began.

With Argyle themselves stagnating in the basement division, the move proved to be an inspired choice for both player and club. Sturrock was seeking a targetman to deploy the tactical masterplan that would propel Argyle out of the doldrums, and in Evans he had found his man. Deployed as a tireless workhorse for his team-mates to aim at when regrouping or launching attacks, Evans was lauded by many a lower-league manager for his peerless ability to shield the ball for the opposition before laying it off to team-mates such as David Friio or Marino Keith. Such personal sacrifice inevitably hindered his goal-scoring ability, and just 34 goals in six seasons are an unfair statistical representation of a player who perhaps worked harder than any other in Argyle's rise up the divisions under Sturrock. In fact, he was one of the few players to maintain his form when the Pilgrims finally returned to the second tier in 2004.

His eventual swansong in 2006 was the kind of fairytale ending that only true club legends are awarded: a winning goal against Ipswich evoking emotional scenes at Home Park and provided a fitting end to the Argyle career of a selfless and dedicated servant. Trigger attempted to prolong his career with Torquay United, but his appetite for the game was diminishing and he retired after just a handful of appearances to concentrate on his Plymouth-based building company.

But more astute observers realised that there was a genuinely instinctive striker in that Rotolok shirt and we eventually lost him to the ...  More

But more astute observers realised that there was a genuinely instinctive striker in that Rotolok shirt and we eventually lost him to the Premiership when Graeme Souness signed him for Southampton to save their season, which he did - scoring four vital goals leading to the two of them earning the Premiership monthly awards in April 1997.

Four years later, another pretty good striker saw that Evans was the man to help Argyle drag themselves out of the League 2 mire. Paul Sturrock knew that Michael would be the focal point for his strategies, both home and away. Almost immediately, we won outside Devon for the first time in more than 500 days with Mickey scoring both goals in a 2-1 win at York. The green touchpaper was well and truly lit.

For the next five years, Evans was often the fulcrum of the attack as Argyle powered up the leagues. He may not have scored quite the number of goals that you might have expected from a frontline striker, but that wasn't the point. He brought the rest of the team into the attack. We scored from all over the pitch as a result. Few Argyle forwards have been quite as good at that, before or after his time.

The fans didn't always see it like that, but the more valued judgements always came from opposition managers who knew that Evans was the man that their best laid plans had foundered upon.

Anyone who continued to claim that he was just a big lump stuck up front had to swallow their words after that clever goal against his namesake in the Swindon goal, when he picked up he ball and knocked it into the net with a deft flick off his opponent. Genius, quick thinking, skilful - case closed on the naysayers.

Then it came time for him to say farewell to Argyle for a second time - and he did it with a diving header in front of the Devonport End to win the last match of the season against Ipswich for his beloved hometown team.

A fairytale ending for a fantastic career, one rewarded by one of those rare things in modern day football, a testimonial season in which all Argyle fans came together to salute one of their own.

Also, his last ever game for Argyle v Ipswich he attempted a back flick type dummy, he landed on his backside, he got up, laughed and the whole of the ground laughed with him, not at him. ...  More

Also, his last ever game for Argyle v Ipswich he attempted a back flick type dummy, he landed on his backside, he got up, laughed and the whole of the ground laughed with him, not at him.

Lovely player, some called him the 'poor man's Mark Hughes' and that says it all. Every defender that played against Trigger knew they had been in a game. He was underestimated by a lot of Argyle fans, but what a player he was. Lovely player, lovely man and I'm proud to have seen him play so many games for Argyle.

Best goal? Two spring to mind. The early one v Colchester in the the Play-off semi-final and the cracker against Coventry City at Highfield Road - even the Sky Blue fans applauded that one.

You cannot underestimate the value of a player like Trigger to any team. He could turn any hasty lumped clearance into an attacking opportunity by getting the ball under control from anywhere whilst also fending off the attentions of uncompromising defenders. He could then bring his own team mates into the game and thus create goal scoring opportunities for them as well as getting his own fair share of goals. A great team and club man representing his home club. Will we ever see his likes again? I sincerely hope so.

Mickey Evans is another of my all-time Argyle favourites. Plymouth born and bred, Mickey, or "Trigger", was a powerful number 9 who was a handful for defences week in, week out. Nearly every fan in the stadium would get excited as soon as Mickey was on the ball, often setting up his teammates, although I have very fond memories of him scoring goals too! His final Argyle game, against Ipswich, was a special one, grabbing the winner in a 2-1 win.

Greens on Screen is run as a service to fellow supporters, in all good faith, without commercial or private gain.  I have no wish to abuse copyright regulations and apologise unreservedly if this occurs. If you own any of the material used on this site, and object to its inclusion, please get in touch using the 'Contact Us' button at the top of each page. Search facility powered by JRank Search Engine.Milonic UK time at page load: 22 January 2021, 19:06.