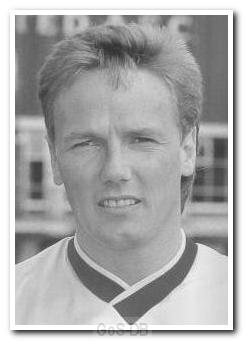 Edwards was the closest thing the Football League had to Tommy Tynan when he arrived at Home Park in the winter of 1990. Tynan had been released the previous summer after his legs finally gave up on him, and Edwards - just two years Tynan's junior - was drafted in on loan from Huddersfield Town as manager Dave Kemp searched for a cure to his side's goal-scoring ills. The then 33-year-old had notched up 255 goals for seven different lower-league clubs by the time he turned up at Home Park, and scored his 256th and last while in a green shirt. It came in a 5-3 defeat at Oldham and, despite his new team scoring six goals in his three appearances, Edwards failed to add to his debut strike and he returned to Huddersfield to see out the final season of his career in the reserves.

Greens on Screen is run as a service to fellow supporters, in all good faith, without commercial or private gain.  I have no wish to abuse copyright regulations and apologise unreservedly if this occurs. If you own any of the material used on this site, and object to its inclusion, please get in touch using the 'Contact Us' button at the top of each page. Search facility powered by JRank Search Engine. Hover facility courtesy of Milonic. UK time at page load: 22 April 2021, 21:54.