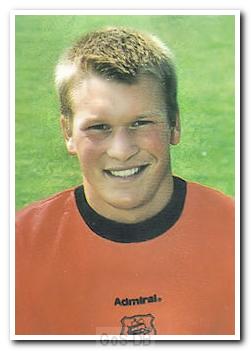 A highly promising young goalkeeper who came through the Home Park ranks, Dungey looked to have a bright career in the game ahead of him. He made his England Schoolboys debut as a 14-year-old in 1992, and became the youngest first team player in Argyle's history - at that time - when he came on as a 16-year-old at Stockport in October 1994. But the much-anticipated growth spurt that Argyle and Dungey were hoping for never materialised, and Dungey's career was effectively over before it had even begun. He did go on to make 13 appearances for The Pilgrims over the next three seasons, but he was allowed to join Exeter in 1997. After just one appearance for The Grecians, he returned to Home Park to pull on the keeper's jersey on nine more occasions before being shown the door for the second time.

If nothing else, Dungey is assured a lifetime of Question of Sport stardom after having the dubious honour of being in goal the day 'keeper Jimmy Glass scored a winner against Argyle to keep Carlisle United in the Football League.

Greens on Screen is run as a service to fellow supporters, in all good faith, without commercial or private gain.  I have no wish to abuse copyright regulations and apologise unreservedly if this occurs. If you own any of the material used on this site, and object to its inclusion, please get in touch using the 'Contact Us' button at the top of each page. Search facility powered by JRank Search Engine.Milonic UK time at page load: 21 January 2021, 07:10.