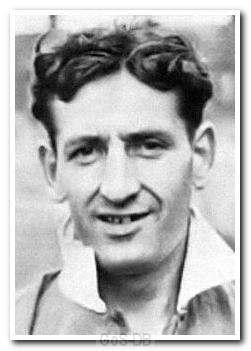 Dryden was one of 27 in the guest category. Born in Sunderland, the winger started his career locally with Washington Chemical Works before heading south to Bexleyheath & Welling, from where he came to the attention of Charlton Athletic. War arrived before he made the first team grade with The Addicks, but he did play 26 times for the south-east London side during the conflict, scoring 14 goals including 11 in the 1942-43 season. He also guested for Clapton Orient, and didn't need to leave the capital to make his single guest appearance for Argyle, a defeat against Arsenal at Highbury. After the war he returned to non-league football and the north-east to sign for Hylton Colliery.

However, Dryden did get a second chance at a Football League career when he signed for Swindon Town in 1947, making 21 appearances and scoring three goals, and a year later he returned to the capital to join Leyton Orient, where he played 40 times and scored ten. He then dropped back to the non-league game, signing for Tonbridge in 1950, followed by fellow Kent side Snowdown Colliery Welfare before joining Margate in October 1952. He spent one last season with Sittingbourne in 1953-54 before retiring from football.

Greens on Screen is run as a service to fellow supporters, in all good faith, without commercial or private gain.  I have no wish to abuse copyright regulations and apologise unreservedly if this occurs. If you own any of the material used on this site, and object to its inclusion, please get in touch using the 'Contact Us' button at the top of each page. Search facility powered by JRank Search Engine. Hover facility courtesy of Milonic. UK time at page load: 18 May 2021, 09:22.