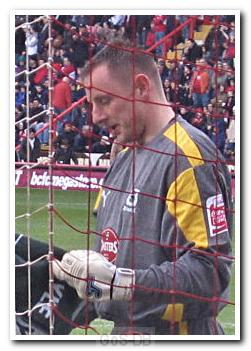 Douglas was a Scottish international goalkeeper (19 caps) who joined Argyle on a one-match emergency loan in March 2008 after a suspension for Luke McCormick left Argyle without a recognised first team goalkeeper. Douglas turned in an outstanding display in a 2-1 win at Bristol City  his only-ever appearance for Argyle.

'Rab' was playing for Leicester City at the time and had previously been with Livingston, Dundee and Celtic in Scotland, and whilst with Leicester he had also had loan spells with Millwall and Wycombe Wanderers. Two months after his one game for Argyle he was released by Leicester and then rejoined Dundee, where he spent a further five years and made 168 appearances between the sticks. In July 2013, at 41 years old, Douglas joined Scottish League One side Forfar Athletic and he starred in goal as the minnows slayed Rangers 2-1 in the Scottish League Cup - a win that some at Forfar claimed was the club's greatest success. His contract was extended and his 6'4" frame continued to dominate the Loons' woodwork over the following seasons.

In total he made 84 appearances for Forfar before quitting in protest at the sacking of manager Dick Campbell in December 2015. He then spent almost a year without a club before signing for Scottish League Two side Arbroath, where he joined up again with Campbell. However, he left the club in January 2017, having not made an appearance. He then re-signed for Arbroath two months later, before leaving the club for the second time at the end of the 201617 season.

In a case of 'third time lucky' he rejoined the Lichties in the 2017-18 season and made headlines when he played a match for them as cover keeper, aged 45, keeping a clean sheet at Hampden Park, no less, in a fine away win for Abroath against Queen's Park in November 2017.