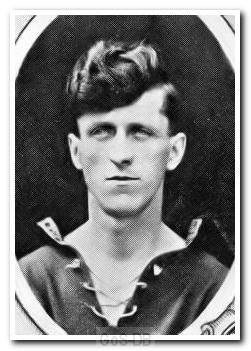 Deacon signed for his hometown team in Argyle's second season of League football, having previously represented Devon County. A seven-year spell at Home Park followed, but the half-back found it hard to break into the team, making just five appearances and scoring once, in a home draw against Brighton & Hove Albion in March 1923. Records show that Argyle was Deacon's only League club, although he did go on to play further matches for Devon County on leaving Home Park.

Greens on Screen is run as a service to fellow supporters, in all good faith, without commercial or private gain.  I have no wish to abuse copyright regulations and apologise unreservedly if this occurs. If you own any of the material used on this site, and object to its inclusion, please get in touch using the 'Contact Us' button at the top of each page. Search facility powered by JRank Search Engine. Hover facility courtesy of Milonic. UK time at page load: 22 April 2021, 21:54.