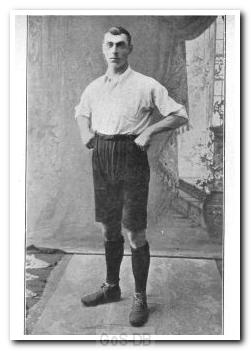 Cox was born in Blackpool in 1883 and had a brief spell with his hometown club after starting his career with Rossendale United. In 1904 he joined Bury and played primarily for the reserves, making just 4 first team appearances. He was signed by Argyle in May 1904 and described by the club handbook as "a tall and promising centre-forward or inside-left".

Despite a sensational start to his time at Home Park, a hat-trick on his debut against Brentford, he could not secure a regular place in the team and moved on to Leicester Fosse at the end of the season. He went on to play for Accrington Stanley, Oldham Athletic, Preston North End, Dundee, Heart of Midlothian and Bradford Park Avenue.

Private William Cox died whilst serving his country on 6 November 1915, one of seven ex-Argyle players to be killed in the First World War.

Greens on Screen is run as a service to fellow supporters, in all good faith, without commercial or private gain.  I have no wish to abuse copyright regulations and apologise unreservedly if this occurs. If you own any of the material used on this site, and object to its inclusion, please get in touch using the 'Contact Us' button at the top of each page. Search facility powered by JRank Search Engine. Hover facility courtesy of Milonic. UK time at page load: 23 April 2021, 04:22.