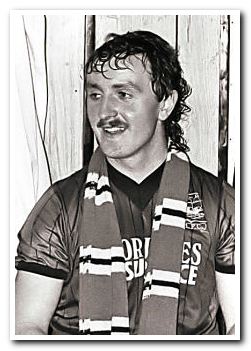 Coughlin joined Argyle from Carlisle in 1984 and was an integral part of the 1986 promotion winning side. He began his career as a trainee at Manchester City but failed to make the grade there, joining Blackburn Rovers in 1978, and then a four-year spell at Carlisle preceded his move to Home Park. The Welsh schoolboy international was both skilful and tough in the middle of the park, with a knack of scoring goals. He moved back up north to join Blackpool in 1987, and a loan move to Shrewsbury Town followed before a transfer to his hometown team Swansea City. He ended his career back in Devon with Torquay United and Exeter City.

Greens on Screen is run as a service to fellow supporters, in all good faith, without commercial or private gain.  I have no wish to abuse copyright regulations and apologise unreservedly if this occurs. If you own any of the material used on this site, and object to its inclusion, please get in touch using the 'Contact Us' button at the top of each page. Search facility powered by JRank Search Engine. Hover facility courtesy of Milonic. UK time at page load: 19 April 2021, 22:57.