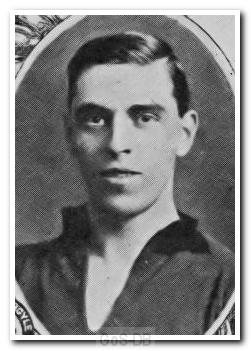 Note: Unofficial record books call him Fred Cosgrove, but we've found three strong pieces of contemporary evidence to say he was Frank (the 1920-21 PAFC Handbook, the UK Incoming Passenger List for his return from the 1924 tour of South America, and an advert for his benefit match in the Western Morning News in 1929). Subsequent enquiries have revealed that the Football League ledgers for the 1920s also record him as Frank. Whether Fred was an informal nickname, or just a mistake in modern records, is not known.

Cosgrove played for hometown Durham City before making the long move to Home Park in 1920. The Durham-born right-back spent 11 seasons at Home Park, featuring in Argyle's first season in the Football League through to their first season in Division 2. He clocked up over a century of appearances for the Greens before calling time on his career; Argyle was stalwart Cosgrove's only League club.

Greens on Screen is run as a service to fellow supporters, in all good faith, without commercial or private gain.  I have no wish to abuse copyright regulations and apologise unreservedly if this occurs. If you own any of the material used on this site, and object to its inclusion, please get in touch using the 'Contact Us' button at the top of each page. Search facility powered by JRank Search Engine.Milonic UK time at page load: 18 January 2021, 16:33.