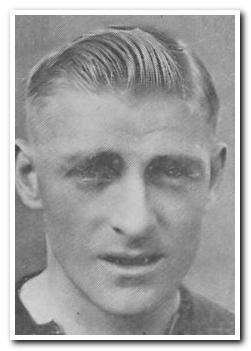 Mancunian Cookson began life as a right-back with South Salford Lads' Club and then played for Clayton and Manchester North End before he was signed by Manchester City in 1923. Failing to make a breakthrough into City's first team, he was loaned to Southport for a trial period in 1924, and then moved on to Chesterfield the following year. His conversion to a centre-forward at Saltergate saw his career take off and break records galore, scoring a remarkable 85 goals in just 74 games. Signing for West Bromwich Albion in 1927, he continued to bang in the goals - 103 in 122 games - and was a key part of the team that won the FA Cup and promotion to Division One in 1930-31. He was also selected for the FA tour of Canada in 1931. In one match for the Midlands club he scored six times, against Blackpool in 1927, with five coming in a 24 minute spell in the second half. A move to Argyle in 1933 did not blunt his instincts; his great quality: a willingness to shoot, and shoot early, whenever a chance came his way. His rich scoring form continued, especially in his first year in green, when he bagged close to a goal a game. After three seasons at Home Park, he ended his career at Swindon Town, where he was as prolific as ever, scoring 31 goals in 50 games.

I painted this picture of my grandfather Jimmy Cookson.

Greens on Screen is run as a service to fellow supporters, in all good faith, without commercial or private gain.  I have no wish to abuse copyright regulations and apologise unreservedly if this occurs. If you own any of the material used on this site, and object to its inclusion, please get in touch using the 'Contact Us' button at the top of each page. Search facility powered by JRank Search Engine. Hover facility courtesy of Milonic. UK time at page load: 23 April 2021, 04:25.