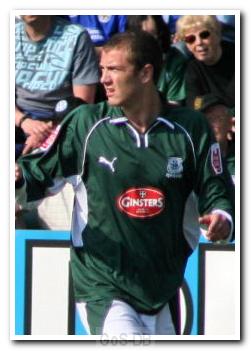 Liverpool-born Connolly, affectionately nicknamed 'Shelley' by his Janner team-mates due to his Scouse upbringing, came through the youth ranks at Home Park. Early in his career he had a spell on loan at non-league Bideford. He broke into the Argyle first team, originally sharing the right-back role with David Worrell and then Anthony Barness for a few seasons, but eventually made the position his own. Connolly's only goal came in his 136th game and in his final season for the club, in a 3-0 win over Norwich City; teammates and home fans joined him in joyous celebration. He chose to see out his Argyle contract that season in order to leave on a free transfer, joining Derby County in May 2008.

Connolly spent three seasons with the Rams in the Championship, making 72 appearances and was made captain. However he fell out of favour with new boss, Nigel Clough and eventually lost his place in the team. He went out on loan to Sheffield United in March 2010 and upon his return to Derby was linked with fellow Championship side Leeds United. Connolly agreed a three-year deal with Leeds in June 2010, signing on a free transfer and making his debut against, ironically, Derby.

Although featuring heavily for Leeds during the 2010-11 and 2011-12 season Connolly was placed on the transfer list by former Argyle manager Neil Warnock at the end of the 201112 season. He moved on one-month loan to Portsmouth in August 2012 and to Preston North End in early 2013 until the end of the season. He was released by Leeds at the end of his contract having played 64 times for them. Connolly was linked with a number of clubs including New York Red Bulls, but signed for Championship side, Millwall, in September 2013 on a short-term deal until the end of the year. However he picked up injuries and failed to make the mark at the Den and was released in January 2014 after just four appearances for the Lions.

Connolly was snapped up by Crawley Town in February 2014. However, in April 2014 he reacted angrily to a Brentford fan throwing a ball at him and received a five match ban by the FA. Crawley manager (and former Argyle manager and player) John Gregory didnt offer him a contract extension at the end of the season and he was released. Connolly signed for newly promoted Luton Town at the beginning of the 2014-15 season, playing in a 1-0 defeat at home to Argyle in September 2014.

Despite signing a one-year contract at Kenilworth Road, Connolly played in only six games and struggled with fitness and injuries throughout the season. He was released from his contract in April 2015 and went on to make 28 Conference North appearances for Stockport County in the 2015-16 season. He then moved into Welsh football with a spell as captain of Airbus UK Broughton before moving to Bangor City in November 2016, initially on loan and then permanently for the Welsh Premier League side.

Shelley's one and only goal was quite an event. You can hear Sparksy's commentary by going to the GoS home page, then choose 2007-2008 under the Recent Seasons heading, then scroll down and click on the folder icon for game 16, then click on the second microphone.

Paul said in a recent interview that he received a call from Paul Sturrock to come down for a trial game so he could have a look at him. This was initially verbally and I'm sure awkwardly turned down by Shelley due to funds for the rail fare. A couple of days passed and Shelley received a paid ticket to Plymouth from Paul Sturrock who was obviously keen on having a closer look at the young scouser.

After being picked up by McCormick at Plymouth station he was thrust into a game at Home Park and fittingly offered a two year deal. ...  More

Paul said in a recent interview that he received a call from Paul Sturrock to come down for a trial game so he could have a look at him. This was initially verbally and I'm sure awkwardly turned down by Shelley due to funds for the rail fare. A couple of days passed and Shelley received a paid ticket to Plymouth from Paul Sturrock who was obviously keen on having a closer look at the young scouser.

After being picked up by McCormick at Plymouth station he was thrust into a game at Home Park and fittingly offered a two year deal.

This turned out to be one of Sturrock's best wee nuggets, finding a young full-back who would go on to make 177 appearances for us before moving to Derby on a Bosman.

I think Shelley was under-rated whilst here and it's shown since he left with the following right-backs that have tried and IMO failed to replace and fill his boots in the form of Duguid, N'Gala and latterly Berry not living up to Connolly.

I think this also has a bearing on Sheridan's reluctance to play 4-4-2.

Any player coming in for nothing that goes on to have a successful stint at Championship level for a good decade is testament to the player he certainly was for us.