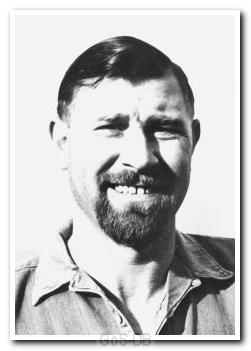 Chisholm began his career as a teenager with Tottenham Hotspur in 1942, but war service soon took precedence. Returning after the war, he found it hard to break into the first team, so moved to Brentford in 1947. After 18 months at Griffin Park, he was sold to Sheffield United and then joined Argyle six months later.

Chisholm lacked all the necessary components to become a top footballer  he had little speed, agility, stamina or genuine skill. 'Jumbo', however, imprinted his name in Argyle history with his leadership qualities and sheer physical presence at centre-half. He was a giant in the air and a thunderous tackler, but it was his ability to cajole his more talented colleagues into action that made him so important to the club. He was also reputed to enjoy a drink in the Britannia Inn before home games. Injuries and lifestyle cut his career short in 1954, but the legend of Jack lived on, with one of the club's hospitality lounges called 'The Chisholm Lounge' until the redevelopment of Home Park's south side in 2018.

Greens on Screen is run as a service to fellow supporters, in all good faith, without commercial or private gain.  I have no wish to abuse copyright regulations and apologise unreservedly if this occurs. If you own any of the material used on this site, and object to its inclusion, please get in touch using the 'Contact Us' button at the top of each page. Search facility powered by JRank Search Engine. Hover facility courtesy of Milonic. UK time at page load: 22 April 2021, 21:09.