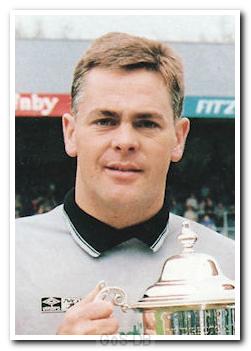 The popular goalkeeper came to prominence with a fantastic display for his first club, Derby County, against Argyle in the 1984 FA Cup quarter-final. Cherry, who had a loan spell with Port Vale early in his career, joined the Pilgrims from Walsall in 1986, and soon won the support of the Green Army with his solid displays between the sticks. He found it difficult to settle in the West Country though, and moved back up north in 1988, initially on loan to Chesterfield and then joined Notts County.

He made over 300 appearances for County in the next six years, followed by a short spell with Watford before moving back to Home Park for a loan spell that was followed by a permanent transfer for just one game: the 1996 play-off final victory. That summer he moved to Rotherham United and went on to play for Rushden and Diamonds, Mansfield Town, Oldham Athletic and Lincoln City as well as several non-league clubs including Kettering, Kidsgrove Athletic and Belper Town.

Greens on Screen is run as a service to fellow supporters, in all good faith, without commercial or private gain.  I have no wish to abuse copyright regulations and apologise unreservedly if this occurs. If you own any of the material used on this site, and object to its inclusion, please get in touch using the 'Contact Us' button at the top of each page. Search facility powered by JRank Search Engine.Milonic UK time at page load: 21 January 2021, 09:09.