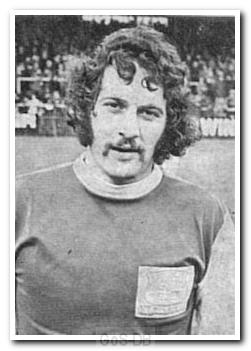 Cave was a striker who had a brief spell on loan from Bournemouth. After starting his career with Weymouth, he spent three years at Torquay United, playing over 100 games for the club. Moving on to Bournemouth, he struggled to break into the first team but after his time at Home Park, played fairly regularly at Dean Court. A transfer to York City followed, where he played for three years, including a season on loan to Los Angeles Skyhawks. Returning to Bournemouth, he played for the club for another 18 months before moving permanently to the United States. He played for Seattle Sounders, Pittsburgh Spirit, Cleveland Cobras and Hartford Hellions before returning to Pittsburgh, where he died at the age of 35 following a tragic accident.

Greens on Screen is run as a service to fellow supporters, in all good faith, without commercial or private gain.  I have no wish to abuse copyright regulations and apologise unreservedly if this occurs. If you own any of the material used on this site, and object to its inclusion, please get in touch using the 'Contact Us' button at the top of each page. Search facility powered by JRank Search Engine. Hover facility courtesy of Milonic. UK time at page load: 23 April 2021, 03:36.