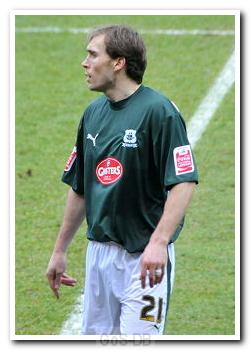 Anderson was a Scottish international centre-back (11 caps) who joined Argyle on loan from Sunderland in February 2008. He began his career at hometown club Aberdeen and captained the Dons for four seasons before joining Sunderland in June 2007 for a reported £1 million fee. He spent three months at Home Park and his performances led to a recall to the Scotland squad. After returning to Sunderland he joined Burnley on loan, making his debut in a tepid goalless draw against Argyle in August 2008. He suffered a season-ending cruciate ligament injury in his fifth game for the Clarets. He did not play for Sunderland again and on release in January 2010, moved to Derby County. Anderson endured another injury-riddled spell at the Rams and had his contract cancelled by mutual consent.

He re-signed for Aberdeen in January 2012 and was soon re-appointed as Dons' captain. In 2013-14 Anderson led the Dons to Scottish League Cup glory, beating Inverness Caledonian Thistle on penalties in the final at Celtic Park. He made his 400th appearance for the club on the final day of the same season.

In May 2014, Anderson signed a new one-year contract and captained five out of the six of Aberdeen's Europa League matches. However, during the match against St Johnstone in August 2014 he injured his knee and remained sidelined for most of that season. In May 2015 he announced his retirement, but remained at Pittodrie in a business development role. In September 2017 he also took up a position as assistant manager at Highland League club, Formartine United, supporting his brother-in-law, who was the Pitmedden side's manager.