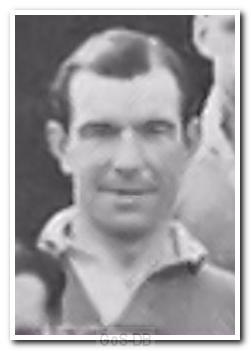 Note: Donald Cases nickname of Ron is a mystery. Its origin is not known but it seems it became so common that he was often recorded as R.Case, even in the club's handbooks of that time. However, his registration with The Football League confirms he was Donald, as does the England & Wales register of births.

Case was one of 21 players whose only first team games for Argyle were in the Football League South season and who usually played in local football or for the Armed Forces. Born in Plymouth, he was a strong centre-forward signed from local amateur side Plymouth United, having scored a remarkable 29 goals in 10 appearances for them that season. He had also played for the Royal Navys Torpedo Depot  which as a centre forward was probably a headline writers dream. The club registered him with the Football League on 11th January 1946 and he made his debut and solitary appearance for the club the next day in a home defeat by Newport County. The following day the Western Independent said: "A trial was given to Case, the Plymouth United centre-forward, who showed once or twice that he can shoot, but obviously he is not yet ready for this class of football."

Case appeared in the team photo at the start of the following campaign, but made no further first team appearances and only played once for the 'A' team in the Plymouth & District League in the 1946-47 season.