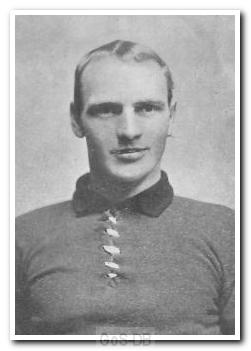 Butler was born in Kiveton Park, near Sheffield, in 1885 and began his career with his hometown club. He moved on from 'The Park' to join Grimsby Town in 1904 and played there for three years, initially as a centre-forward before a change of position to full-back. He made 44 appearances for The Mariners, scoring twice. In 1907 Butler moved to Home Park where he became the first-choice right-back for almost eight years and an extremely reliable performer.

On Boxing Day 1910, Butler was involved in a peculiar moment in Argyle's history: an outfielder was forced to wear the goalkeeper's jersey for the whole game, the only such circumstance in the club's history and one that is unlikely to occur again. Horne was taken ill in London ahead of the match at West Ham, and with Sutcliffe not with the travelling party because he was unwell in Plymouth, right-back Butler played the entire match between the posts. The 4-0 defeat was an inevitable result of the depleted side, which also saw Argyle play with only ten men in the first half, before trainer Tommy Haynes turned out for the second period.

The 1913-14 Argyle handbook described Butler as "an evergreen, who retains most of his original speed, while as a genuine whole hearted trier he is unequalled". The First World War effectively brought Butler's career to an end, although he did return to Home Park after the conflict, but without making any further first team appearances.

Greens on Screen is run as a service to fellow supporters, in all good faith, without commercial or private gain.  I have no wish to abuse copyright regulations and apologise unreservedly if this occurs. If you own any of the material used on this site, and object to its inclusion, please get in touch using the 'Contact Us' button at the top of each page. Search facility powered by JRank Search Engine.Milonic UK time at page load: 18 January 2021, 16:50.