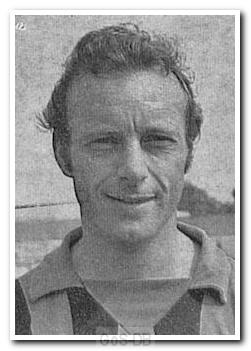 Born in Haydock, Burrows started his career with Wigan Boys before moving to Aston Villa  originally on the ground staff after leaving school  where he progressed through their youth set-up between 1956 and 1958, mainly as an outside left. Helping Villa win the Second Division title in 1959-60, he went on to play 147 times and score 53 goals, and win an England U23 cap, before moving to Stoke City after six years in claret and blue. He became hugely popular with The Potters and helped them retain their First Division spot. He spent almost a decade with the club, playing 245 games and scoring 68 goals. On leaving City in 1973, he moved to Home Park to see out his career, playing just over a season in green before retiring from the game and returning to Staffordshire.

Greens on Screen is run as a service to fellow supporters, in all good faith, without commercial or private gain.  I have no wish to abuse copyright regulations and apologise unreservedly if this occurs. If you own any of the material used on this site, and object to its inclusion, please get in touch using the 'Contact Us' button at the top of each page. Search facility powered by JRank Search Engine.Milonic UK time at page load: 21 January 2021, 08:05.