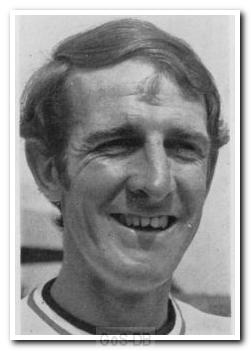 Despite playing for Bristol Schoolboys and the England Youth side, Burnside was not signed by either of his hometown clubs, beginning his career with West Bromwich Albion instead. An attacking midfielder, he established a reputation as an extremely skilful player and was also renowned for his ball-juggling skills - he even succeeded in a national newspaper competition to find the player who could achieve the most consecutive headers (Burnside won with 495). Moving on after five years at The Hawthorns, he spent two years each with Southampton, Crystal Palace and Wolves before arriving at Home Park in 1968.

A change of position to centre-forward led to Burnside winning the Player of the Year award in his first full season with Argyle, but he could not keep up this form and lost his place the following year. Reverting to midfield, he played regularly in 1970-71, but when he found himself back in the reserves the following season, chose to transfer to Bristol City. This move lasted just three months and one appearance, and after spending the remainder of the season with Colchester United, Burnside retired. He went on to play non-league football as player-manager at Bath City and also as player-coach for Minehead, Bridgwater Town and Taunton Town.

There have been few Argyle players, before or after David Burnside, who could match him for skill with the ball. With West Bromwich Albion, his first club, he was well-known to the crowd, even before he had appeared in the first team, for the ball-juggling displays with which he enlivened the intervals at matches. Later, in 1960, he won a competition, organized by the Sunday Despatch to discover the British player who could produce the most consecutive headers. Burnside, with 495, was way ahead of his nearest rival, Tommy Harmer of Tottenham on 286. Of course, under match conditions such virtuoso displays, even if possible, are an indulgence, but the clubs he served found that there was more to David Burnside than simply ball-tricks.

Bristol-born, he played for that citys schoolboys' side before signing for West Brom at the age of 17. He made his debut for the Throstles in 1957 and subsequently played for Southampton, Crystal Palace and Wolves before joining Argyle in 1968. After using him for a while as a conventional inside-forward, Argyle switched Burnside into the middle of the attack, playing him as a deep centre-forward where his control and passing ability could be put to good account. He was elected Argyles Player of the Year in 1969 but he lost both form and a first-team place the following season.

While with Argyle, he commuted to Plymouth from Bristol and it therefore seemed to the players advantage that he should be transferred from Home Park to Bristol City. However, he remained at Ashton Gate for only three months before moving again, to Colchester United where he spent one season and ended his League career.

Greens on Screen is run as a service to fellow supporters, in all good faith, without commercial or private gain.  I have no wish to abuse copyright regulations and apologise unreservedly if this occurs. If you own any of the material used on this site, and object to its inclusion, please get in touch using the 'Contact Us' button at the top of each page. Search facility powered by JRank Search Engine. UK time at page load: 10 April 2021, 12:22.