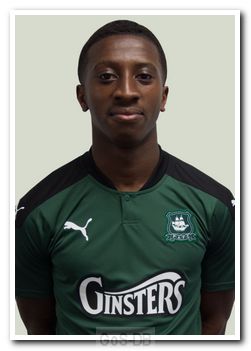 Came from: Nottingham Forrest   Went to:

Fornah signed for Argyle on a season-long loan from Championship side Nottingham Forest at the beginning of October 2020, becoming Ryan Lowe's 11th signing of the extended summer transfer window.

Born in Canning Town, Fornah joined Forest in 2018, having left Brighton & Hove Albion's academy. The combative and athletic midfielder impressed his new coaches with a series of excellent displays for the Reds under-23 side, which led to a three-year contract extension in December 2019. He made his first team debut a month later, coming off the bench in Forests FA Cup third round defeat at Premier League Chelsea.

In February 2020, Fornah moved on-loan to Casa Pia AC, in the Portuguese Second Division, for the remainder of the 2019-20 season. As a Pilgrim, the 21-year-old made his first team debut at Cheltenham in the EFL Trophy, four days after becoming a Green, and the following weekend made his full Football League debut against Burton Albion at Home Park, when was voted man of the match.

Greens on Screen is run as a service to fellow supporters, in all good faith, without commercial or private gain.  I have no wish to abuse copyright regulations and apologise unreservedly if this occurs. If you own any of the material used on this site, and object to its inclusion, please get in touch using the 'Contact Us' button at the top of each page. Search facility powered by JRank Search Engine. Hover facility courtesy of Milonic. UK time at page load: 23 April 2021, 04:15.