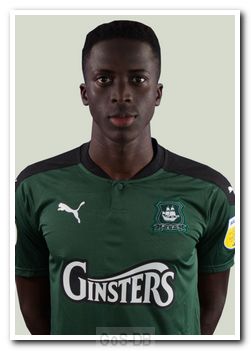 Came from: Crawley Town   Went to:

The 6' 1" attacking midfielder became Ryan Lowe's fourth summer signing of the 2020 pre-season transfer window after declining an offer to extend his contract at Crawley Town.

Originally from Guinea-Bissau in western Africa, Camara (strictly Camará) began his football in England with the Barnsley under-23 set-up. In early 2017 he moved to south London to join Dulwich Hamlet in the seventh tier of English football, where his performances in a short stay (four goals in 15 games), impressed scouts from Crawley Town. The 20-year-old duly signed for the League Two club at the end of June 2017 and made an instant impact by scoring a screamer on his debut, against Birmingham City in the EFL Cup. His physicality, power and work-rate soon made him a firm favourite at the Peoples Pension Stadium, where he played 118 times over the following three seasons.

At the end of the 2019-20 campaign, cut short by the COVID-19 pandemic, Camara turned down the offer of a new contract with the Red Devils to head west for Home Park, despite keen interest from several League One clubs.

Greens on Screen is run as a service to fellow supporters, in all good faith, without commercial or private gain.  I have no wish to abuse copyright regulations and apologise unreservedly if this occurs. If you own any of the material used on this site, and object to its inclusion, please get in touch using the 'Contact Us' button at the top of each page. Search facility powered by JRank Search Engine. Hover facility courtesy of Milonic. UK time at page load: 22 April 2021, 22:07.