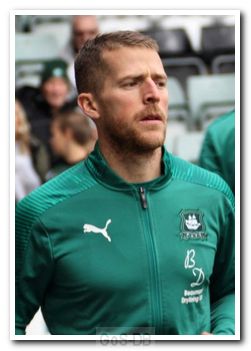 Striker Clarke joined the Pilgrims on a short-term deal in mid-October 2019. The experienced Irish forward was a free agent, having been released by Bradford City at the end of the 2018-19 season, where he had played 136 times and scored 26 goals in two spells at the club.

Born in Cork in the Republic of Ireland, Clarke was 31 when he signed on at Home Park, having played just shy of 400 games in a 13-year career that began at Ipswich Town, where he graduated from the Tractor Boys academy. In total he made 56 first team appearances at Portman Road, scoring four times.

He seemed destined to join Bolton Wanderers in the summer of 2019 after reuniting with his former Bradford & Colchester manager, Phil Parkinson, but the deal was scuppered when Parkinson left the club due the financial difficulties that almost led to Bolton's liquidation and Football League expulsion.

Clarke's short-term contract as a Pilgrim proved to be just that. In a little less than three months, his 12 appearances included nine from the bench and none of his three starts lasted the full 90 minutes. His goalless spell at Home Park ended in January 2020 when he joined his 13th club, Grimsby Town.

Greens on Screen is run as a service to fellow supporters, in all good faith, without commercial or private gain.  I have no wish to abuse copyright regulations and apologise unreservedly if this occurs. If you own any of the material used on this site, and object to its inclusion, please get in touch using the 'Contact Us' button at the top of each page. Search facility powered by JRank Search Engine.Milonic UK time at page load: 21 January 2021, 07:54.