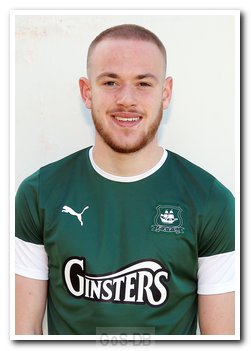 Came from: Rangers   Went to:

Rudden, a highly rated 19-year-old striker, signed towards the end of August 2019 on a half-season loan from Rangers, the move no doubt facilitated by manager Ryan Lowe's Merseyside links with Steve Gerrard at Ibrox.

Rudden had yet to make his debut for Rangers but his development there included caps for Scotland at under-16 (2 games, 0 goals), under-17 (12 & 2) and under-19 (13 & 6) levels. He enjoyed a successful 2018-19 season on loan at Falkirk, scoring 12 goals in 31 appearances in the Scottish Championship. This wasn't enough to prevent their last-day relegation but did result in him scooping four Player of the Season awards.

The tall, powerful target man missed much of the 2019 pre-season because of a knee injury, which flared up again to disrupt his time in green, but he nevertheless managed nine starts and an equal number of appearances from the bench in just over four months at Home Park. He returned to Scotland in January 2020 and then joined another Glasgow Club, Partick Thistle, on a permanent deal.