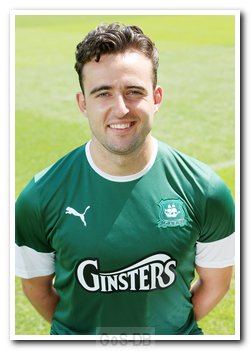 Came from: Oldham   Went to: Released

Born in Bootle, the 27-year-old attacking midfielder signed a short-term deal to join Ryan Lowes Pilgrims at Home Park during the summer of 2019.

Baxter became the youngest first-teamer in Everton's history when he made his debut for the Toffees in August 2008, at the age of 16 years and 191 days. Despite an incredible rise to prominence, or perhaps because of it, Baxter failed to fulfil his potential on Merseyside, making only 15 appearances for Everton (seven in the Premier League) before leaving Goodison Park in the summer of 2012, having spent three months of his final Everton season across the water on loan at Tranmere Rovers.

After his release from the club he had joined when he was just seven years old, Baxter joined League One Oldham Athletic on an initial four-month deal. A debut goal came the following day and impressive form at Boundary Park led to interest from a number of clubs, but Baxter put pen to paper on a long-term deal with the Latics in January 2013.

His continued run of impressive form led to firm interest from Sheffield United, who were managed by Baxters former youth manager, David Weir. Baxter joined the Blades for a reported £500,000 early in the 2013-14 campaign. His Oldham form was unaffected by the pressure of a big money move and he was nominated for the League One Player of the Month that December. His season was capped by scoring the opening goal during Uniteds unlikely run to the FA Cup Semi-Final, which they lost 5-3 to Hull City.

The following season, Baxter again found form in knock-out football, including a notable pair of penalties in a 3-0 victory over John Sheridans Pilgrims in the FA Cup second round at Bramall Lane.

In the years to follow, Baxter encountered his fair share of off-the-field problems, which culminated in him serving a ban from playing professionally as a result of a failed drugs test. In January 2017 his career was thrown a lifeline at the club where it all began, as Everton Chairman Bill Kenwright invited the academy graduate to train with the club. A one-year contract followed, much to Baxters surprise, and he spent the 2017-18 campaign working diligently to get fit and regain match-sharpness in the Everton under-23 side.

The following year he joined League Two Oldham Athletic again, completing a journey back into the professional leagues before taking a new turn, to Home Park in July 2019. However, hopes of were quickly dashed; a recurring calf injury limited his opportunities and in mid-November, with the injury persisting, he left the club by mutual agreement, some weeks before the end of his contract.

In February 2020 Baxter joined Memphis 901, a club from Tennessee in the USL Championship, where Tim Howard, in goal for Everton when Baxter made his record-breaking debut, was the Sporting Director.