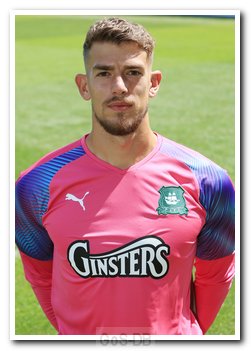 Palmer, not a bad name for a goalkeeper, signed in July 2019 for new manager Ryan Lowe on a season-long loan from West Bromwich Albion.

Born in Kidderminster, he joined West Brom as a raw 15-year-old from Worcester City. Benefiting from the strong coaching structure at the Hawthorns, he earned four caps for England at under-16 level and a professional contract with the Baggies in 2014.

The 18-year-old had his first taste of the senior squad when he was given a place on the bench for Albion's Premier League fixture with Arsenal in May 2015, and then joined National League Kidderminster Harriers on a half-season loan that summer. In January 2017 he returned to Kiddy for a second loan spell, accumulating an overall total of 19 appearances for the Carpetmen.

Palmer was given a taste of the Football League when playing once for West Brom's under-23 side in the EFL Trophy in November 2016 and then made three appearances for their under-21 side in that competition in the autumn of 2017. He made his long-awaited full League debut as an emergency seven-day loanee for Oldham Athletic in November 2018, and later that season made another one-off appearance in similar circumstances for Notts County.

Although he came to Home Park with just two conventional Football League games under his belt, Palmer became a regular in his loan season for Argyle, including a clean sheet on his debut on the first day of the 2019-20 campaign.