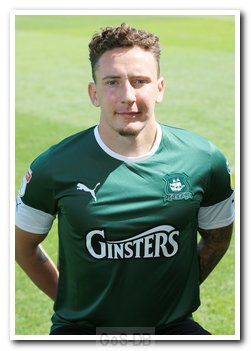 McFadzean was one of five League Two promotion-winning Bury players to follow manager Ryan Lowe to Home Park in the summer of 2019, alongside Will Aimson, Danny Mayor, Dom Telford and Byron Moore.

A product of the youth academy at hometown Sheffield United and younger brother of fellow Blades' graduate Kyle, he made his first-team breakthrough at Bramall Lane at the start of the 2012-13 season while still a teenager. Loan spells at Chesterfield, Burton Albion and Stevenage followed, along with Scotland under-21 honours before he signed for Scottish Premiership Kilmarnock in the summer of 2016.

The following March he was loaned to Alfreton in the National League North and was then picked up by National League side Guiseley for the 2017-18 campaign. That led to a successful trial at Bury in the summer of 2018 and then 49 appearances for the Shakers in their promotion season, before the club was sadly forced to close.

The left wing-back made an instant impression for the Pilgrims, scoring twice in a 3-0 win at Crewe on the opening day of the 2019-20 season. Over the following months his interplay with his ex-Bury teammate Danny Mayor became a striking feature of Lowe's attacking style, but a knee injury kept him on the sidelines for ten weeks in the winter months, and a few weeks later the season was cut short by the COVID-19 pandemic.

McFadzean was offered a renewed contract for the 2020-21 season, but after a long deliberation he decided to return north, a new baby and a strong family ties the deciding factors.