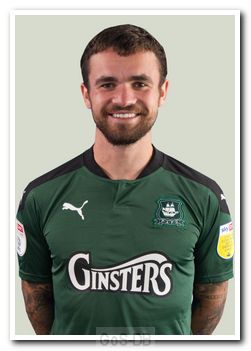 Telford was one of five from the previous seasons promotion-winning Bury side to follow manager Ryan Lowe to Home Park in the summer of 2019, during the Greater Manchester club's financial crisis.

The Burnley-born striker began his career at Blackpool, and while only 17, graduated to the first-team for the start of the 2014-15 Championship season, in which he made 14 appearances and scored in only his second game.

Still a teenager, he was snapped up by Premier League Stoke City in July 2015, where he spent the next three seasons without making a first team appearance. His third season on Stoke's books was spent on loan at Bristol Rovers in League One, playing 24 times (20 as a substitute) and scoring five before his move to Gigg Lane in July 2018.

In Bury's 2018-19 promotion-winning season, Telford scored 14 times in 48 appearances, half of his goals coming in the Shakers' EFL Trophy run that saw them reach the semi-final stage.

Greens on Screen is run as a service to fellow supporters, in all good faith, without commercial or private gain.  I have no wish to abuse copyright regulations and apologise unreservedly if this occurs. If you own any of the material used on this site, and object to its inclusion, please get in touch using the 'Contact Us' button at the top of each page. Search facility powered by JRank Search Engine.Milonic UK time at page load: 18 January 2021, 16:49.