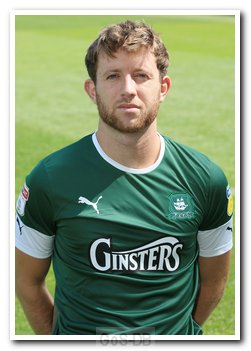 Aimson followed Argyle manager Ryan Lowe from Gigg Lane to Home Park in the summer of 2019, having made 43 appearances under Lowe at Bury in the 2018-19 season, when the Shakers won promotion to League One.

The Hampshire-born central defender had previously played for Tamworth and Tranmere Rovers on loan from Hull City, who had picked him up as a teenager from non-league Eastleigh.

Aimson's promising start at Tranmere was brought to a sudden end in November 2014 when he collided with a team-mate, breaking both tibia and fibula bones.

After successfully recovering from his career-threatening injury, Aimson joined Blackpool on loan a year later, a move that was eventually made permanent. After 69 appearances whilst at Bloomfield Road, Aimson joined Bury in July 2018, where, along with four other members of the 2019-20 Argyle squad, he won promotion to English football's third tier.

When signing at Home Park, Lowe described Aimson as much sought-after and a Championship-standard player. However, he arrived with a pelvic injury that curtailed his involvement in pre-season preparation and meant he missed the opening games of the 2019-20 campaign.