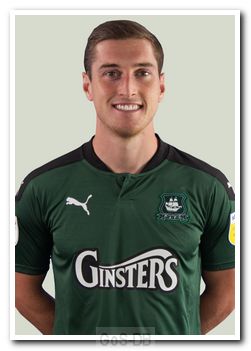 Came from: Everton   Went to:

Grant became Derek Adams' first summer signing for the 2018-19 season, but at the second time of asking; a move for the left-footed midfielder fell through in January 2018 because of a FIFA rule that prevented players from appearing for more than two teams in a season (Grant had been on loan at Crewe Alexandra and also played one Checkatrade Trophy game for Everton earlier that season).

Born in Fazakerly, a suburb in north Liverpool, Grant was a product of Everton's Academy, having been with the club since the age of 13. He signed his first professional contract in July 2013, having featured in the club's pre-season games, and his first exposure to the first-team in a competitive fixture came in December 2014 when he was named as a substitute against FC Krasnodar in the Europa League.

Other than his Checkatrade outing, his main exposure at Everton was with the under-23 side, but loan moves also aided his development. In February 2015 he joined Motherwell for the remainder of the campaign, getting off to a dream start by netting a stunning 25-yard free-kick against Ross County. He went on to make 12 more appearances and help the Fir Park side beat the drop.

In July 2015 Grant signed a new one-year contract at Everton, and three months later joined Doncaster Rovers on loan, where he played 22 times and scored four goals before his season was curtailed in mid-March after sustaining an Achilles injury.

A new two-year contract was agreed at Goodison Park in July 2016, followed by a loan deal with Ipswich Town that August. After seven appearances the loan was cut short and he rejoined Doncaster Rovers in January 2017, on loan for the rest of that season, where he made a further 21 appearances, scoring once.

In 2017-18 Grant made 18 appearances in a half-season loan spell with Crewe Alexandra before being released by Everton at the end of the campaign, this time successfully paving the way for his move to Home Park.

Greens on Screen is run as a service to fellow supporters, in all good faith, without commercial or private gain.  I have no wish to abuse copyright regulations and apologise unreservedly if this occurs. If you own any of the material used on this site, and object to its inclusion, please get in touch using the 'Contact Us' button at the top of each page. Search facility powered by JRank Search Engine. Hover facility courtesy of Milonic. UK time at page load: 22 April 2021, 22:13.