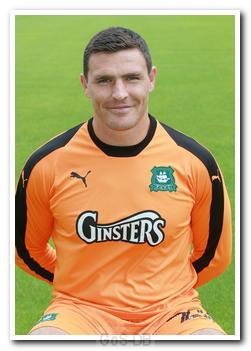 Came from: York City   Went to:

The son of former Leeds and Swansea goalkeeper Glan Letheren, Kyle graduated to professional terms from Swansea City's academy, but did not managed a senior outing. His time with the Swans included a loan spell at Newport County from November 2005, and on his return at the end of the season, he was released.

He then joined Barnsley in July 2006, but appeared only once in his three seasons at Oakwell, as a substitute in an FA Cup tie against Blackpool in January 2008, which Barnsley won 2-1. The Blackpool goalscorer that day was future-Pilgrim David Fox, although the goal was scored prior to Letheren taking over in goal. He spent the second half of the 2008-09 season on loan at Doncaster Rovers as cover for their regular keeper, and then was released by Barnsley at the end of the season.

Letheren then signed a four-month contract with Argyle, then in the Championship, to provide cover for regular keeper Romain Larrieu. His contract expired in January 2010 and manager Paul Mariner chose not to renew it. He then agreed to join Motherwell as emergency cover but the move was blocked by the Scottish Premier League as Motherwell were deemed to have enough goalkeepers.

In August 2010 Letheren signed for Kilmarnock as a back-up keeper. He made no appearances in his first season but eventually made his Scottish Premier League debut as a half-time substitute against Motherwell in March 2012. The 2012-13 season gave him two spells of regular play when the first-choice keeper suffered injuries. Letheren left Kilmarnock by mutual consent in April 2013 after a total of 12 appearances, keeping three clean sheets and conceding 13 goals.

Letheren signed for Dundee in July 2013, with whom he had his most successful spell. He was first-choice keeper in his first season and was voted the Player of the Year by Dundee's supporters association. His second season was blighted by injury and after losing his first-choice position, he was released May 2015. During his two years with Dundee, he made 56 appearances in all competitions, keeping 24 clean sheets and conceding 51 goals.

Letheren returned to England in July 2015, signing for League One club Blackpool on a two-year deal. In his first season he made eight appearances and conceded 18 goals with no clean sheets. His contract with Blackpool was terminated by mutual consent in August 2016 to allow him to join National League side York City. He made 28 league appearance for York in their first season after relegation from the Football League, with five clean sheets and 40 goals conceded. The season ended on a high, however, when he appeared for York City in the FA Trophy Final in May 2017, beating Macclesfield Town 3-2. He was released at the end of the season.

Letheren then signed for Argyle for a second time, as a free agent in September 2017, becoming the third senior goalkeeper in the first team squad.