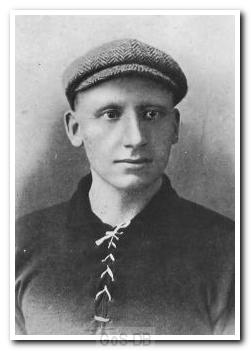 Buchanan was born in Bellshill in Scotland in 1878 and began his career with Third Lanark. He also played for Bellshill Athletic before heading south to join Brentford, with whom he faced Argyle in their first season in the Southern League. He then spent the 1904-05 campaign with Middlesbrough before moving to Home Park.

The 1905-06 Argyle handbook states that he was "a clever inside-foward possessing complete knowledge of the game". Despite playing fairly regularly for the first team he moved on at the end of the season, initially to Clapton Orient for whom he made 65 appearances over the next two years, before ending his playing career as player-manager at Leyton.

After hanging up his boots, Buchanan managed clubs in England, Wales and Scotland. In 1913 he was appointed secretary-manager at Merthyr Tydfil and in 1922 he managed for a season at Hamilton Academical. In 1928 he began three years in charge of Thames AFC, with the notable achievement of taking the east London club into the Football League (Division Three South) in 1930.