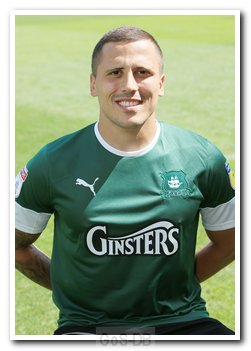 Came from: Shrewsbury Town   Went to:

Although his name suggests otherwise, Antoni Sarcevic was born and bred in Manchester, his name the consequence of an Italian grandmother and a Serbian grandfather. He joined Manchester City's youth setup at the age of seven and spent eight years progressing through the ranks before leaving to join the youth system at Northern Premier League Division One North side Woodley Sports in 2008. He made his first team debut a year later and that same season was offered a trial at Premier League club Blackburn Rovers.

In May 2010 the 18-year-old signed for Crewe Alexandra in League Two, and in the following October was loaned to Northern Premier League Division One North club Chester. After impressing in his loan spell, he was recalled to Crewe and went on to make his Football League debut in February 2011. Ten months later he returned to Chester as a permanent signing. Chester were promoted twice in the following two seasons, reaching the Football Conference, and after impressive performances for his club, Sarcevic won an England C cap, scoring in a match in Bermuda.

In the summer of 2013, with a season remaining on his Chester contract, Sarcevic joined League Two side Fleetwood Town, whom he helped to promotion in his first season at the club. That season he scored 15 goals from midfield, including a hat-trick in November and a goal from a free-kick in the League Two play-off final at Wembley. In all he played 138 times for Fleetwood, scoring 20 goals.

In May 2016 Sarcevic joined fellow League One side Shrewsbury Town on a two-year deal, but the move was not a success. Six months later his contract was terminated by mutual consent, and in January 2017 the 24-year-old arrived at Home Park to become Derek Adams' third capture of the transfer window.