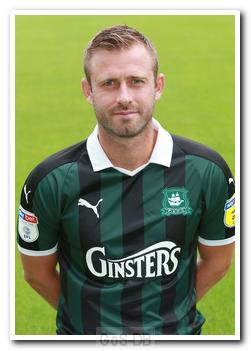 Came from: Crewe Alexandra   Went to:

The son of former Exeter City manager and player Peter Fox, David was born in Leek, Staffordshire when his father was keeping goal for Stoke City. He moved to Devon when dad rejoined former Stoke colleague Alan Ball at St James Park and the young Fox quickly became a rising star in the Grecians' youth set-up. He joined Manchester United in July 2000 as a 16-year-old but was unable to break into the Red Devils' first team set-up. After loans with United's Belgian feeder club Royal Antwerp and Shrewsbury Town, and captaining United's reserve team to the Premier Reserve League title, he joined Blackpool in January 2006.

After 108 appearances in three years with Blackpool, Fox signed for Colchester United in July 2009, before moving to Norwich City a year later. He helped the Canaries to promotion to the Premier League before rejoining Colchester in 2014 after four seasons (76 games) at Carrow Road. A year later he moved to Crewe Alexandra, for whom he made 41 appearances in the 2015-16 season.

After his release by Crewe, Fox returned to Devon to take up a trial with Argyle, which included appearances in three of the Pilgrims' pre-season friendlies. The 32-year-old midfielder impressed manager Derek Adams enough to become the 13th new Pilgrim (and third David) to join the club in the summer of 2016.

Fox became an almost ever-present in his first two seasons at the club, helping to win promotion in 2017, and his consistent and influential performances at the heart of midfield made him a popular member of the side. In the summer of 2018, despite his family remaining committed to life in the North West, he accepted the offer of a new contract to become part of Derek Adams' side for a third season.

Greens on Screen is run as a service to fellow supporters, in all good faith, without commercial or private gain.  I have no wish to abuse copyright regulations and apologise unreservedly if this occurs. If you own any of the material used on this site, and object to its inclusion, please get in touch using the 'Contact Us' button at the top of each page. Search facility powered by JRank Search Engine.Milonic UK time at page load: 21 January 2021, 07:42.