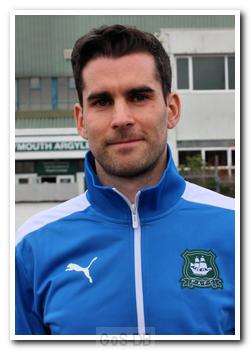 Came from: Bury   Went to: Bury

Born in Coventry, the much-travelled marksman joined the Pilgrims on loan in January 2016 until the end of the season.

Nardiello began as a schoolboy with Wolverhampton Wanderers but at the age of 16 signed for Manchester United for an initial fee of £200,000. His United debut came as a 71st minute substitute for a future Pilgrim, Bojan Djordic, in a 4-0 defeat at Arsenal in the League Cup in November 2001, and his starting debut, 12 months later, must have been even more memorable: he played alongside the likes of David Beckham, Rio Ferdinand, the Neville bothers and Paul Scholes in a two-goal home win over Leicester City. In total he spent six years at Old Trafford, although his chances were limited to three League Cup fixtures and a notable substitute appearance in the Champions League (a 3-0 defeat at Maccaba Haifa).

While a Red Devil, Nardiello was loaned to Swansea City for a month in the autumn of 2003, where he scored once in five games, and then in the second half of that season to Barnsley. He was a greater success at Oakwell and returned for a season-long loan in 2004-05, accumulating a total of 14 goals in 47 appearances in those 18 months at the South Yorkshire club. Released by United in the summer of 2005, he moved, perhaps unsurprisingly, back to Barnsley to play a further 67 games and score 16 more goals across the following two years.

In May 2007 he also won a full international cap for Wales, following in the footsteps of this father, Donato, who played twice for Wales in the early 1980s. Daniel's sole cap came as a substitute in a friendly against New Zealand in May 2007. A month later he rejected an offer of a new contract at Barnsley and also turned down an approach from Norwich City, electing instead to move to fellow Championship side Queens Park Rangers.

The move to London was not a resounding success and in January 2008 Nardiello was loaned back to Barnsley, playing 11 further games for the Tykes and scoring one more goal. He left Loftus Road in the summer of 2008 having played eight games for the west London club, without scoring.

A move to Blackpool then followed, but he was plagued by injuries and also had a loan spell at Hartlepool United, where he clocked up three goals in 12 games in the 2008-09 season. He started the following campaign in Blackpool's team but a further injury saw him join Bury on loan to regain fitness in September 2009, where he scored four goals in six games before he was recalled. However, his injury problems continued, limiting him to just four more games for Blackpool and a further two on loan at Oldham, without scoring. In total his two years on Blackpool's books amounted to nine appearances, only three being starts, with just a single goal.

In the summer of 2010 he moved to Exeter City for a highly productive two-season spell, which reignited his career. He scored 24 goals in 77 games for the Grecians, including a winner against Argyle in a Johnstone's Paint Trophy tie at Home Park in August 2011. Next came a move to Rotherham United, where he scored 19 goals in his first season to help the Millers win promotion from League Two.

Continuing his form into the following season, Nardiello started life in League One with five goals in four matches, but after six goalless games he was loaned to Bury for a second time. He immediately settled again, scoring five in 11 games before signing permanently when the January 2014 window opened. In total he had made 51 appearances for Rotherham, scoring 24 goals. The goals continued after his permanent move to Gigg Lane, including a brace in a 4-0 win against Argyle in April 2014, and he then grabbed 14 in 38 appearances in the following campaign as Bury finished third and were promoted.

Nardiello missed the start of the 2015-16 season through injury and had made just one substitute appearance for Bury before his move back to Devon at the age of 33. With Argyle in second place in League Two, his vast experience - 114 goals in 374 career games - promised to be an important factor in the push for promotion.